What's the opposite of employee-centred case management?

Rehab is about supporting the employee, leading them in a positive direction, setting goals, engaging, and return to work. Not billable hours.

Judy believed she was a tough person who could deal with whatever life brought her. On injuring her shoulder she became increasingly despondent and isolated, challenged by pain that would not go away and a disjointed merry- go-round system.  Effective rehab, the cornerstone of case management, was missing.

Judy* was a cook in an aged care facility when she first injured her shoulder cleaning kitchen windows. She reported the injury and it got better in no time.

“Then one of the machines in the kitchen broke; the vitamiser” said Judy. Her employer didn’t replace the broken equipment, so Judy used a bar mix to get the job done. The continual up and down motion of blending food by hand stirred up Judy’s initial injury.

A GP indicated Judy had a torn rotator cuff. She began a treatment plan, eager to get on the road to recovery.

“I had physio, I had acupuncture, but over a month nothing worked. The shoulder got worse.”

After four weeks off work, Judy’s first day back was a difficult: she struggled with her tasks.

“I ended up going back to work and three times my body couldn’t cope.”

“There was still no conclusion on what the actual injury was, but I ended up with chronic pain syndrome,” said Judy.

So, she was put on medication for the pain. Her situation rapidly declined.

“I ended up on – at my worst – 450mg of morphine a day plus antidepressants, and they didn’t even help the pain,” said Judy.

“I always thought I was a tough person; being independent...for so many years, I thought I could handle anything.”

Judy went from being highly motivated to return to work to pessimistic she would ever recover. She suffered from debilitating pain, frustration about being away from work, struggles in dealing with a complicated system that sent her to multiple appointments, to the point she contemplated suicide.

Judy is adamant that dealing with WorkCover was her main barrier to recovery and RTW. “The system just isn’t working,” she said.


Lack of involvement by rehab provider

Judy believes that some rehab providers aren’t living up their end of the bargain.

“This rehab person charged [WorkCover] $1,600 a month for a phone call and paperwork,” Judy alleges. “I had one where she came to work to help me, one visit where she came to fill out some paperwork that was needed, and she came to visit me once in one of my hospital stays.”

Judy says she and her doctor organised all of her treatment.

“But she [the rehab provider] still got paid for it,” she said. “The rehab provider rang me once every month – and nine times out of 10 it was me ringing her to tell her what my doctor had suggested I do.”

While the rehabilitation provider kept in contact, communication felt perfunctory and process driven.

“WorkCover send you to a lot of doctors. The stress [of that] was not only physical, but mental.”

Judy described feeling as though none of her WorkCover doctors were communicating with each other.

“I had four different opinions on what was wrong with my shoulder [from the WorkCover doctors], and not one of them matched.”

Judy says much of her stress was caused by the Claims Agent’s expectations of her, without any consultation or explanation.

“They have got no idea of how to treat country people,” says Judy.

Judy lives 140 kilometres away from Adelaide, but that seemed of little relevance.

“They don’t think about you being able to get to and from appointments,” said Judy. “One week I had six appointments in a week in Adelaide – and all in different places in Adelaide.”

WorkCover also scheduled physio in Adelaide for Judy for three days a week over a period of four months. Judy became agitated and stressed about getting to the appointments. Her husband took as much time off as he could on their single income.

Eventually, Judy’s doctor decided the appointments were having a significantly negative health impact on Judy, so he sent a certificate to the Claims Agent explaining this.

“I used to sit back and wonder, ‘Was this just a way to wear you down, to get you out of the system?’ said Judy. “Because they sure weren’t trying to get me back to work.”

The process of multiple appointments and travel  and lack of agreement about her condition wore Judy down. It had a major impact on her morale.

Judy credits a meeting with Rosemary McKenzie-Ferguson, of the Work Injured Resource Connection Centre, as the turning point in helping her recover.

Judy was in Adelaide, alone in a hotel, when her husband recognised she was in trouble. “He rang Rosemary, who he’d heard on the radio, and said, ‘Look, I’ve just spoken to my wife, this is the situation: she’s in Adelaide, I’m in the country. I can hear the desperation in her voice.”

Rosemary, who has been through a complicated WorkCover process herself, went to see Judy that evening. “I was sitting there counting my tablets. And when Rosemary got there, I was debating about whether to take the lot. I’d had enough.”

“In the back of my mind, all I could think of was that I was going to be a grandma for the first time. As much as I couldn’t wait to see this grandchild...I really wasn’t thinking about seeing it alive; because I wasn’t going to be around to see it.”

After their first meeting, Judy and Rosemary spoke every day for around three weeks. Judy’s husband also spoke with Rosemary.

Judy said Rosemary’s support was crucial to getting her head cleared enough to decide to reduce her painkiller intake. She told her GP, who was cautious at first about the idea.

Judy gradually got off the morphine. Judy says going drug-free, despite the pain, has changed her life.

“Sometimes I just sit down on the ground in total frustration, crying my eyes out,” says Judy. “Some days, every now and then, I’ll have a really good day.”


The state of rehab in SA – moving from the case example to the system.

“to date the existing model of claim management and vocational rehabilitation has not demonstrated the ability to provide this skilled intervention, particularly through targeted early referral to rehabilitation in appropriate cases. “

The graph below from the PWC report shows the percent of cases where the person is certified totally unfit for work and is referred for rehab. South Australia has over double the rates of other states. Fine if it is working, but a waste of money if it is not. 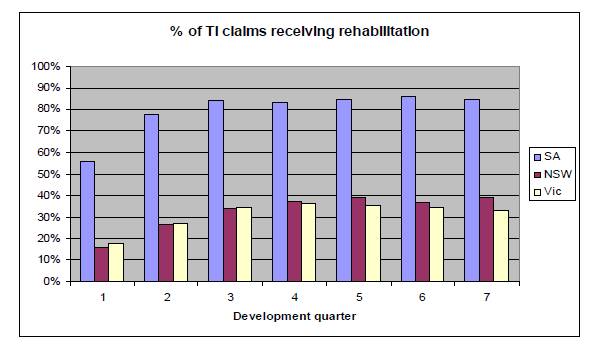 The costs of rehab are high in SA. The graph below shows the SA costs escalating, and substantially higher than other adjacent states. 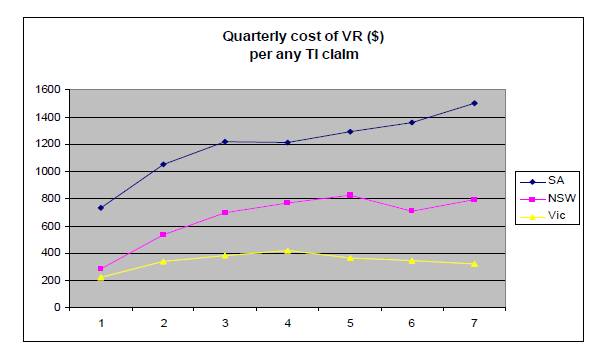 Many in SA say the focus is on billable hours – the number of hours a rehab provider can charge for a case. A call or two per month, spending time on writing reports / going through the motions can tally up to a sizable bill – many thousands of dollars per case. There are some good rehab providers who achieve great outcomes, but there are many who don’t.

A system is broken when the person who should be assisted is harmed.

*Name has been changed to ensure the privacy of interviewee.

The 7th annual Psychological Injury Management in the Workplace Congress